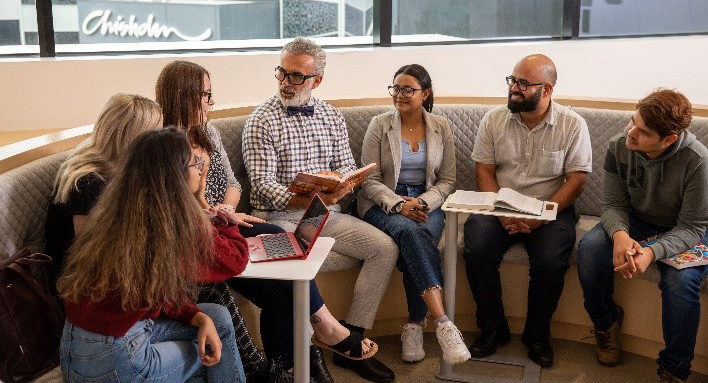 Chisholm Frankston has introduced Australia’s first fast-track Bachelor of Psychology course, which will revolutionise education in the region.
Diploma-qualified students of all ages can go straight into the second year of the course, which starts on February 28.
Dr Andrew Bridges, Dean of Chisholm Higher Education College, said: “Entry-level diploma students can qualify for an Associate Degree in Psychology in one year and a Bachelor of Psychology in two years”.
The psychology course incorporates a wide range of transferable skills that can be used in business, community, numeracy, literacy and analysis, “launching students towards their chosen career path”.
Dr Bridges said psychology was “a great foundation for a wide variety of areas. Not all people who study psychology become registered psychologists or work in mental health. I am an applied psychologist and my first job was designing aircraft cockpits”.
He said the skills gained from psychology analytical studies could, for example, be used in the fields of early childhood, education, industrial design, sport, nursing, business or human resources.
Committee for Greater Frankston CEO Ginevra Hosking praised the initiative and said “Chisholm’s innovative Bachelor of Psychology course provides alternative pathways into tertiary qualification for students who weren’t initially set on what they wanted to be”.
“The course will help people broaden their career paths, and will significantly change how students get into work.”
Ms Hosking, a member of a panel providing feedback to Chisholm about industry skills needed in the region, said students completing each year would have something to show for it – an associate degree after the first year; a bachelor degree after the second year.
She said Chisholm’s initiative was another feather in the cap of Frankston’s world-class health and education precinct, which “generates high-paying local jobs 2.5 times faster than the national average and positively affects our region’s prosperity”.
“The precinct includes Peninsula Health’s Frankston Hospital and Monash University’s Peninsula campus, and their jointly run new academic and research building Ngarnga Centre, which is training the next generation of doctors, nurses and allied health professionals,” Ms Hosking said.
The Bachelor of Psychology course will be offered in a “blended” environment – onsite from Chisholm’s new Stage 1 campus redevelopment and online. Stage 1 was built at a cost of $76 million by the state government. The $68 million Stage 2 is underway.