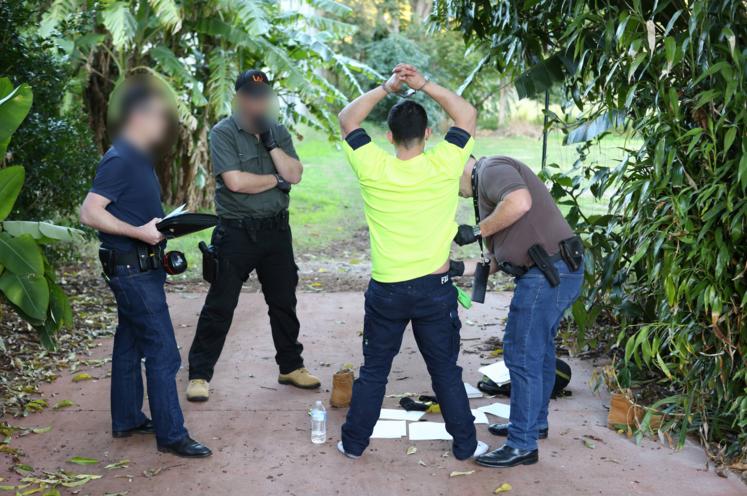 Men have been charged over drug importing claims

The maximum penalty if convicted is life imprisonment.

A 31-year-old Hoppers Crossing man arrested in the Atherton area, was charged with attempting to possess border controlled drugs. The maximum penalty if convicted is life imprisonment.

It will be alleged this man was tasked by the syndicate to transport the drugs south via heavy vehicle.

They will face extradition to Queensland charged with conspiring to import commercial quantities border controlled drugs. The maximum penalty if convicted is life imprisonment.

A 36-year-old Liverpool (NSW) man arrested at Atherton on July 26 faced the Cairns Magistrates Court, charged with:
• Conspiracy to import commercial quantities of border controlled drugs,
• Providing material support or resources to a criminal organisation. The maximum penalty if convicted of these offences is life imprisonment.

As part of the operation the AFP-led Criminal Assets Confiscation Taskforce restrained property and financial assets suspected to be under the effective control of a syndicate member, with an estimated total value of $3.5 million.

The assets include three properties, shares, account funds, and a motor vehicle, all restrained under the Proceeds of Crime Act by orders made by the County Court on July 27.

The men are believed to be members of a Melbourne-based criminal syndicate, with alleged links to Italian organised crime, and were charged for conspiring to import a large quantity of cocaine, suspected to be 500 kilograms, from Papua New Guinea into Australia.

“These arrests prove no matter how sophisticated or opportunistic organised crime’s attempts are, or the methods they use, law enforcement is keeping pace and causing maximum damage to these criminal ventures,” Deputy Commissioner McCartney said.

“With current interstate travel restrictions in place due to COVID-19, the attempt to import illicit drugs into Australia shows how opportunistic and greedy organised crime can be.

“Australian law enforcement remains committed to working collectively to protect Australia, which is especially important now, due to the ongoing impact of the pandemic on the community,”: Deputy Commissioner McCartney said.