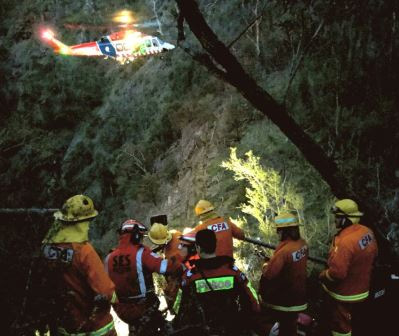 Emergency services rescued a bushwalker who fell down a cliff face with his dog on Sunday afternoon (Aug. 26).

Police have been told two males and their Rottweiler dog ‘Rocky’ were walking at Strath Creek Falls about 5.20pm.

It is believed one of the men and his dog, climbed over a fence and fell approximately 20 to 30 metres down the cliff face.

His friend, a 31-year-old Armadale man, then ran to an area where he could get phone reception and raised the alarm.

A 31-year-old Reservoir man was airlifted to hospital with leg injuries.

His dog Rocky had a fallen a further 10 metres down the cliff face and remained there overnight.

He was rescued by the victim’s friends this morning.

Police urge anyone that may be bushwalking in the area to plan their walk, have appropriate equipment and clothing and abide by any signage.