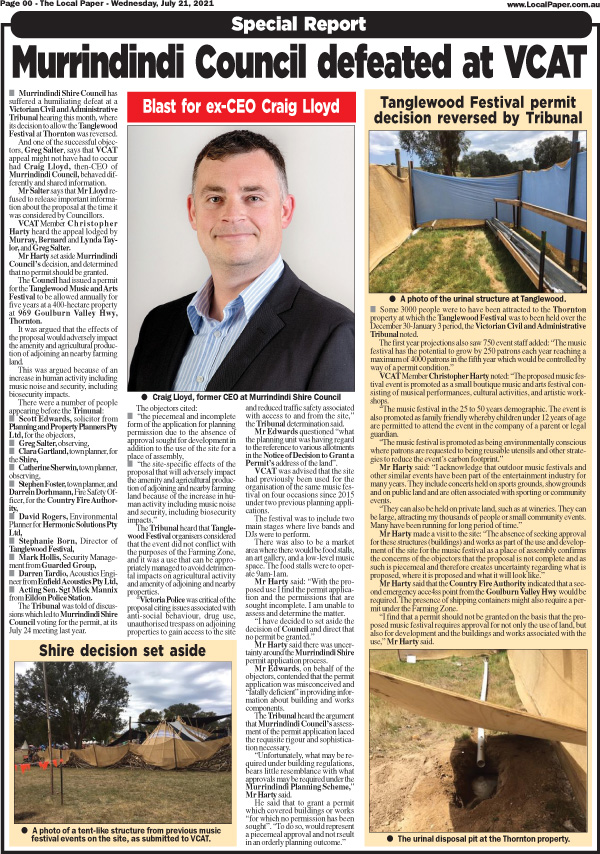 Murrindindi Shire Council has suffered a humiliating defeat at a Victorian Civil and Administrative Tribunal hearing this month, where its decision to allow the Tanglewood Festival at Thornton was reversed.
And one of the successful objectors, Greg Salter, says that VCAT appeal might not have had to occur had Craig Lloyd, then-CEO of Murrindindi Council, behaved differently and shared information.
Mr Salter says that Mr Lloyd refused to release important information about the proposal at the time it was considered by Councillors.
VCAT Member Christopher Harty heard the appeal lodged by Murray, Bernard and Lynda Taylor, and Greg Salter.
Mr Harty set aside Murrindindi Council’s decision, and determined that no permit should be granted.
The Council had issued a permit for the Tanglewood Music and Arts Festival to be allowed annually for five years at a 400-hectare property at 969 Goulburn Valley Hwy, Thornton.
It was argued that the effects of the proposal would adversely impact the amenity and agricultural production of adjoining an nearby farming land.
This was argued because of an increase in human activity including music noise and security, including biosecurity impacts.
There were a number of people appearing before the Trinunal:
• Scott Edwards, solicitor from Planning and Property Planners Pty Ltd, for the objectors,
• Greg Salter, observing,
• Clara Gartland, town planner, for the Shire,
• Catherine Sherwin, town planner, observing,
• Stephen Foster, town planner, and Darrein Dorhmann, Fire Safety Officer, for the Country Fire Authority,
• David Rogers, Environmental Planner for Hermonic Solutions Pty Ltd,
• Stephanie Born, Director of Tanglewood Festival,
• Mark Hollis, Security Management from Guarded Group,
• Darren Tardio, Acoustics Engineer from Enfield Acoustics Pty Ltd,
• Acting Sen. Sgt Mick Mannix from Eildon Police Station.
The Tribunal was told of discussions which led to Murrindindi Shire Council voting for the permit, at its July 24 meeting last year.
The objectors cited:
• “the piecemeal and incomplete form of the application for planning permission due to the absence of approval sought for development in addition to the use of the site for a place of assembly,
• “the site-specific effects of the proposal that will adversely impact the amenity and agricultural production of adjoining and nearby farming land because of the increase in human activity including music noise and security, including biosecurity impacts.”
The Tribunal heard that Tangle-wood Festival organisers considered that the event did not conflict with the purposes of the Farming Zone, and it was a use that can be appropriately managed to avoid detrimental impacts on agricultural activity and amenity of adjoining and nearby properties.
“Victoria Police was critical of the proposal citing issues associated with anti-social behaviour, drug use, unauthorised trespass on adjoining properties to gain access to the site and reduced traffic safety associated with access to and from the site,” the Tribunal determination said.
Mr Edwards questioned “what the planning unit was having regard to the reference to various allotments in the Notice of Decision to Grant a Permit’s address of the land”.
VCAT was advised that the site had previously been used for the organisation of the same music festival on four occasions since 2015 under two previous planning applications.
The festival was to include two main stages where live bands and DJs were to perform.
There was also to be a market area where there would be food stalls, an art gallery, and a low-level music space. The food stalls were to operate 9am-1am.
Mr Harty said: “With the proposed use I find the permit application and the permissions that are sought incomplete. I am unable to assess and determine the matter.
“I have decided to set aside the decision of Council and direct that no permit be granted.”
Mr Harty said there was uncertainty around the Murrindindi Shire permit application process.
Mr Edwards, on behalf of the objectors, contended that the permit application was misconceived and “fatally deficient” in providing information about building and works components.
The Tribunal heard the argument that Murrindindi Council’s assessment of the permit application laced the requisite rigour and sophistication necessary.
“Unfortunately, what may be required under building regulations, bears little resemblance with what approvals may be required under the Murrindindi Planning Scheme,” Mr Harty said.
He said that to grant a permit which covered buildings or works “for which no permission has been sought”. “To do so, would represent a piecemeal approval and not result in an orderly planning outcome.”

Some 3000 people were to have been attracted to the Thornton property at which the Tanglewood Festival was to been held over the December 30-January 3 period, the Victorian Civil and Administrative Tribunal noted.
The first year projections also saw 750 event staff added: “The music festival has the potential to grow by 250 patrons each year reaching a maximum of 4000 patrons in the fifth year which would be controlled by way of a permit condition.”
VCAT Member Christopher Harty noted: “The proposed music festival event is promoted as a small boutique music and arts festival consisting of musical performances, cultural activities, and artistic workshops.
“The music festival in the 25 to 50 years demographic. The event is also promoted as family friendly whereby children under 12 years of age are permitted to attend the event in the company of a parent or legal guardian.
“The music festival is promoted as being environmentally conscious where patrons are requested to being reusable utensils and other strategies to reduce the event’s carbon footprint.”
Mr Harty said: “I acknowledge that outdoor music festivals and other similar events have been part of the entertainment industry for many years. They include concerts held on sports grounds, showgrounds and on public land and are often associated with sporting or community events.
“They can also be held on private land, such as at wineries. They can be large, attracting my thousands of people or small community events. Many have been running for long period of time.”
Mr Harty made a visit to the site: “The absence of seeking approval for these structures (buildings) and works as part of the use and development of the site for the music festival as a place of assembly confirms the concerns of the objectors that the proposal is not complete and as such is piecemeal and therefore creates uncertainty regarding what is proposed, where it is proposed and what it will look like.”
Mr Harty said that the Country Fire Authority indicated that a second emergency access point from the Goulburn Valley Hwy would be required. The presence of shipping containers might also require a permit under the Farming Zone.
“I find that a permit should not be granted on the basis that the proposed music festival requires approval for not only the use of land, but also for development and the buildings and works associated with the use,” Mr Harty said.