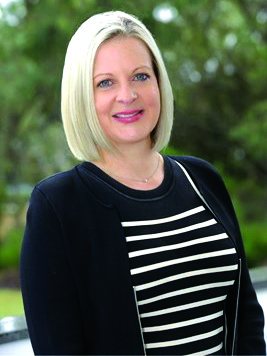 Whittlesea Council’s Executive Manager – Public Affairs, Kristi High (pictured), has filed a Personal Interest Return in which she says she has ‘nil’ beneficial interest in shares in any company.

Ms High’s return, dated April 8 this year, lists a ‘nil’ answer for “companies which you solely or jointly with family members hold a controlling interest”

According to current Australian Securities and Investments Commission records, Ms High holds 100 shares in Puffafish Group Pty Ltd, a company in which her partner Anthony Woodcock is Director, and holds a controlling interest of 200 shares,

As at this month, Ms High has been listed at the company’s website as the public contact for Puffafish Group Pty Ltd. The Local Paper is not suggesting any wrong doing, but only pointing out a possible difference between latest Council records, and other latest Government documents.

“The story of Puffafish is a little like the Brady Brunch with a company twist and two less children,” says the company website.

“One day in 2010, Journalist/Communications Consultant Kristi High met TV/Film guy Anthony (Woody) Woodcock and decided to join forces. “Kristi High Consulting merged into Puffafish a few months later to offer a one-stop-shop all communications/copywriting/film and TV work. Then what happened? “It worked so well they got married, kept up with the comms and film needs of existing and new clients, started a magazine, added a girl to the ‘High-Cock’ family, bought a bookshop in the country, and became Puffafish Group to keep it altogether,” the website says.

In a series of returns lodged with the City of Whittlesea, CEO Craig Lloyd lists his involvement as a member of the Regional Develop-ment Australia (Hume Region).

He lists a beneficial ownership in a residence at Alexandra, and his work as a sole trader musician.

Peita Duncan, also an Administrator, declared involvement with the Volenti Family Trust for “taxation purposes”. She is also Chair of Greyhound Racing Victoria, and Director of Grey-hounds Australia.

Ms Duncan is a Director of On The Bunny Pty Ltd, according to her personal interests return. Newly-appointed Administrator

Her husband is sole director of G. & N. Montalti Builders Pty Ltd which owns a property at Campbellfield.

Anthony Kyrkou, Manager City Presentation, says he had an interest in a Fairfield property owned by his mother and father.

Benjamin Waterhouse, Manager Leisure and Community Facilities, reported on his ownership of a Mill Park residence, that his brother is owner of Commercialscapes and Playsafe Installations, which have done business with the City of Whittlesea.

Frank Joyce said he had interest in properties at Thornbury, Glenroy and Craigie-burn.