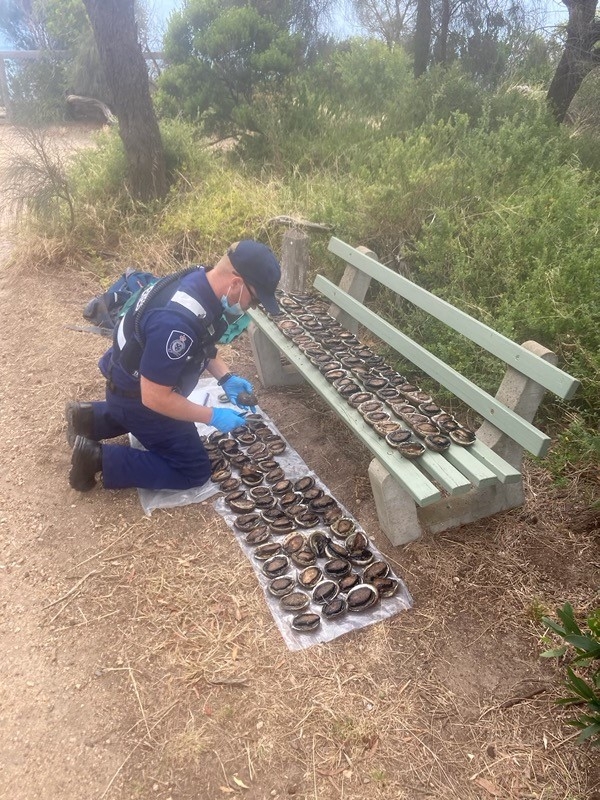 Seven men, allegedly involved in an abalone poaching syndicat.e were arrested at Mornington by Fisheries Officers and Victoria Police.

Mornington officers observed two men, one of which was known to them for previous alleged abalone offences, allegedly taking abalone at Fossil Beach.

Victorian Fisheries Authority Director of Education and Enforcement Ian Parks said the men were searched and apprehended after one of the alleged offenders attempted to flee but was caught and arrested.
“During the search, the two men were allegedly found in possession of a commercial quantity of abalone, including 126 blacklip abalone (76 undersize) and one undersize greenlip abalone,” Mr Parks said.
All abalone were returned to the water and the vehicle and dive equipment were seized.
Both men were taken to the Mornington Police Station for interviews and subsequently charged with taking a commercial quantity of abalone. They were released on strict bail conditions, which included not being within 5km of a Victorian marine water.
Fisheries officers suspected others known to the two men may have also been taking abalone illegally and conducted surveillance later that same day.
Officers observed five men, of which one was also known for previous offences, allegedly take abalone near Fishermans Beach at Mornington.
The men were apprehended at 7.45pm, with assistance from Victoria Police, after they left the coast. Officers found a further 189 blacklip abalone (70 undersize) in the vehicle when it was searched.
The men were arrested and taken to the Mornington Police Station for interviews where they were subsequently charged with taking a commercial quantity of abalone and released on the same strict bail conditions. Their vehicle was seized.
The men are due to appear at Dromana Magistrates’ Court on February 18.