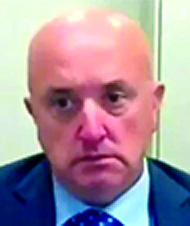 Mr Pinder used some of the funds as a deposit on a $2.5 million home at Williamstown, the IBAC inquiry was told.
Transclean had a $40 million contract with V/Line, and a $5 million contract with Metro Trains.
Both contracts have been cancelled.
Metro operational fleet manager Peter Bollas and Transclean boss George Haritos have had to give evidence at the inquiry over the past week.
Mr Bollas told the inquiry that he and Mr Pinder received monthly payments of up to $10,000 each for more than three years, with Mr Bollas pocketing up to $150,000 in return for advancing Transclean’s interests.
The inquiry was told that Mr Pinder asked Mr Haritos if he could approach “friends” to help him arrange finance for a loan on the Williamstown home.

Bank statements are said to show $320,000 was funnelled through to Mr Pinder from Transclean or associated entities.