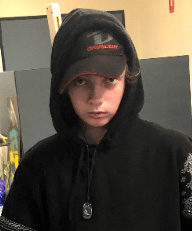 The 14-year-old was last seen in Ararat and is believed to have travelled by train to Melbourne on Sunday, July 12.

Police have concerns for Ryan’s welfare due to his age and the length of time he has been missing.

He is known to frequent a number of areas including the Melbourne CBD, Werribee, Hoppers Crossing, Melton, Mount Waverley, Chadstone and Box Hill.

Police have released an image of Ryan in the hope someone recognises him and can provide information regarding his current whereabouts.