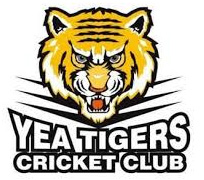 Yea hosted Broadford in a cut-throat semi- final over the weekend.

Mills strode to the wicket in a attacking fashion but adventually holing out to long on for 33. A late 22 from Shell was handy.

Early after tea Yea had bowled Broadford out for 132. Best of the bowlers was Mark Steiner with 5/39 and Daniel Evans with 3/33.

Yea had a hour to bat late Saturday which saw Evans out early at the end of days play Yea were 1/21.

Sunday approached with Yea needing 112 to make back to back Grand Finals. Malcolm and Armstrong were batting well before Armstrong was caught in close.

Most of Yea’s batsman got starts with small partnerships handy. The difference being Damon Malcolm who batted nearly the entire innings making a hard working 49. Yea passed Broadford late on Sunday afternoon.
Broadford toiled hard all day with Bradshaw having the best figures of 2/22.

Yea will play Tallarook at Tallarook in the Grand Final next weekend. We’d love to see amany faces across there to support the boys. Go the Tigers!
Ryan Akers