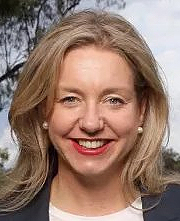 Alexandra-born Senator Bridget McKenzie has been appointed as Federal Minister for Agriculture by Prime Minister Scott Morrison.
“I would like to thank Prime Minister Scott Morrison for appointing me as the Federal Minister for Agriculture,” Senator McKenzie said on Sunday night.
“This is an incredible honour and one of the proudest achievements in my life.
“Having grown up in regional Victoria, I have seen and experienced many of the substantial challenges and tests that rural and regional Australians have faced.
“Australia’s agriculture industry is one of the most important sectors to not just our economy, but also to our regional communities.
“It is worth $60 billion to our GDP and employs over 300,000 Australians, the majority in small business.
“Successful regional communities mean a successful Australian economy and a bet-
ter standard of living for all.
“The future of our fishery, forestry, food and fibre sectors are critical to ensuring we remain a competitive export nation along with providing the essential food and other produce for our nation.
“In this respect, I cannot have been more pleased to welcome my Senate colleague from Tasmania, Jonathon Duniam to the role of Assistant Minister for Fisheries and Forestry. Senator Duniam is a loud and proud advocate for regional Tasmania and is committed to seeing our regions grow and prosper.
“We have seen in the last 18 months, the terrible toll that the drought and other natural disasters have had on our agricultural sector and I want to again thank the Prime Minister for acting so quickly to help regional Australians tackle these adversities.
“I look forward to helping the agriculture sector grow to become a $100 billion industry and employing many more thousands of Australians,” Senator McKenzie said.