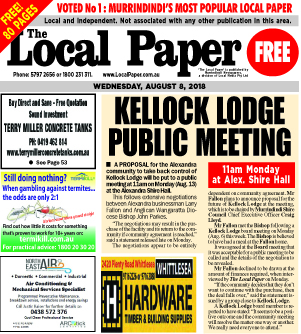 A PROPOSAL for the Alexandra community to take back control of Kellock Lodge will be put to a public meeting at 11am on Monday (Aug. 13) at the Alexandra Shire Hall.
This follows extensive negotiations between Alexandra businessman Larry Fallon and Anglican Wangaratta Diocese Bishop John Parkes.
“The negotiations may result in the purchase of the facility and its return to the community if community agreement is reached,” said a statement released late on Monday.
The negotiations appear to be entirely dependent on community agreement. Mr Fallon plans to announce a proposal for the future of Kellock Lodge at the meeting, which is to be chaired by Murrindindi Shire Council Chief Executive Officer Craig Lloyd.
Mr Fallon met the Bishop following a Kellock Lodge board meeting on Monday (Aug. 6) this week. The Bishop is believed to have had a meal at the Fallon home.
It was agreed at the Board meeting that it was acceptable for a public meeting to be called and the details of the negotiation to be revealed.
Mr Fallon declined to be drawn at the amount of finances required, when interviewed by The Local Paper on Monday.
“If the community decides that they don’t want to continue with the purchase, then the deal falls over,” said the statement issued by a group close to Kellock Lodge.
A Kellock Lodge board member is reported to have stated: “It seems to be a positive outcome and the community meeting will resolve the matter one way or another. We really need everyone to attend.”