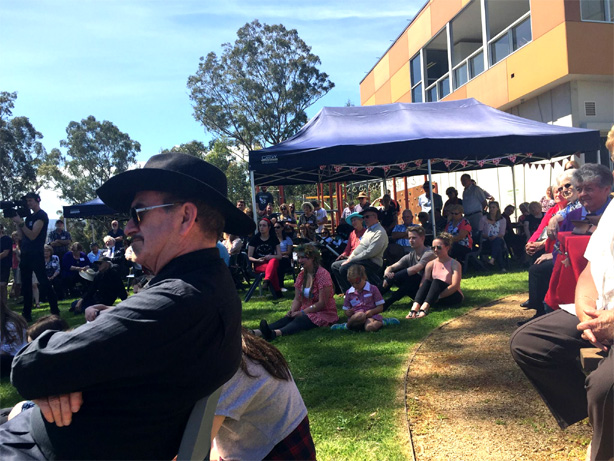 “What a joyous occasion and wonderful celebration it was,” Ms McLeish said. “Dancing, music, singing, art and colour were all constant features. It is incredible to think that such a small community can support a school for such a long period.

“There were so many people at the celebration. I am convinced every living past student and teacher turned up on the day. The ever enthusiastic and spirited principal, Jane Hayward, and her team did a marvellous job.

“The planning team, school council, parents club, teachers and students are to be congratulated for their role in this milestone event.

“Barbara Joyce, known for her chooks, was coordinating a commemorative felt project. Rhiannon Menze baked a large cake, which was cut by Allan Horne, the oldest living ex-student, who started at the school 81 years ago, with Logan Hunt, the youngest student now.

“One of my favourite displays was the 1914 petition by families in the area to the Minister for Education to establish the school. Following consistent campaigning, three years later they had success.

“I recognised so many family names because they are the names also of local roads. Ian McKimmie said that at times his family were 50 per cent of the school population and are seventh generation in the area.

“A favourite moment was the song written by thestudents, Starting from Scratch, telling the story of how they rebuilt their school following the Black Saturday
fires, a time of grief where 27 community members were lost.

“On display were the beautiful books The Promise: The Town that Never Forgets and The Poppy, reflecting the history and the bond forged between the
towns of Villers-Bretonneux in France and Strathewen stemming from World War I, which saw the town in France repay an almost century-old debt by raising
money to support the children in Strathewen inrebuilding their school following the fires,” Ms McLeish said.